I learned embroidery Monday night (3 nights ago) and have already made 3 things.  The first, my cat, was done from a photograph.  The second and third ones were hand drawn.  To make things even better, I found that watching stand-up comedy while working is PERFECT!  I usually get too distracted by having to actually WATCH what is on the TV.  With stand-up, I can just listen and keep plugging along. 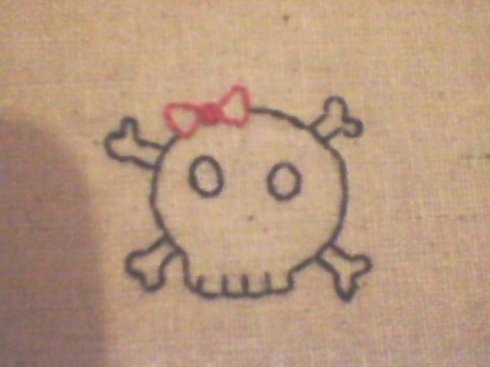 Now, I don’t know who to blame for not teaching me embroidery.  My mother?  Surely she didn’t think that teaching cooking, hand sewing, machine sewing, cross stitch, and latch hook work was enough for her son!  I mean, what was wrong with this woman?!  But all the blame doesn’t lie with her. Just 50%.  The other 50% lies with my former roommate, Sarah, who used to do embroidery all the time at our house.  Sure, she offered once to show me how to do it and I declined, but I can’t see how that is my fault.  Clearly BOTH my mother and my friend have joined the ranks of women who have failed me, alongside the likes of that female cop who gave me a ticket for having an expired license plate.  I mean, what’s 8 months expired?!  I mean, really?  Oh, and that woman who sold me a roast beef sandwich at an Arby’s in Alabama.  I choked on that thing!

This entry was posted on Thursday, December 16th, 2010 at 3:47 pm and tagged with bow, cat, coffee, embroidery, friend, mother, skull and posted in Art, Embroidery, Life. You can follow any responses to this entry through the RSS 2.0 feed.
« Embroidery? Embroider me!
end of the year »